If you have been driving in Southern California for a while chances are you have picked up a speeding ticket or two (or three, or four…) over the years. Speeding tickets in Southern California are not only expensive fines owed to the court if convicted, but they can also do a number on your insurance premiums and potentially lead to a driver license suspension in some circumstances. 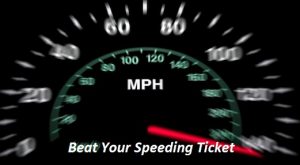 Just like most other driving related offenses*, if convicted of speeding, the DMV will add either one or two points to your driving record depending on the Vehicle Code that you are convicted of. Too many speeding tickets and/or build-up of other DMV points and you may face a driver license suspension based on a action taken by the DMV.
Those are a few reasons why it is important to fight your speeding ticket. This is the case for anyone, but even more important for commercial drivers and others who drive as a part of their jobs. There are many ways to effectively fight a speeding ticket, but first it helps to understand exactly what you are being charged with.

Vehicle Code 22349 – Maximum Speed limit: The maximum speed limit is generally the speeding ticket one would get on the freeway, most commonly for exceeding the posted speed limit of 65mph (or 70mph depending on the posted speed limit). It is possible for getting charged with VC 22349 for driving over 55mph on a two-lane undivided highway as well.

How officers determine your speed

There are several way officers can attempt to determine if you are speeding. Below are a few of the more common ones, as well as a very brief description of some ways these can be challenged and overcome. Please note that the below is not an exhaustive list of defenses and I will often employ other means in order to successfully defend against a speeding ticket.

Radar/Lidar/Laser:  The most common ways that speed is determined are by radar or laser/lidar. In these cases it is key to challenge the reliability of the machine itself (ie. lack of proper calibration), and whether there are other issues with the way the officer used the machine. For example, it is possible for the radar to make an erroneous reading because the wave it sent out bounced off another car, and not yours. That is one of the many possibilities.
Each of these machines has its own particular potential issues that can cause an unreliable or untrustworthy result. If that can be established, then the ticket can be dismissed.
Pacing:  Pacing is basically the process an officer uses when following a vehicle and determining the speed by using the speedometer patrol vehicle. What many don’t realize is that even small human errors or issues with the patrol vehicle can cause major unreliability issues with a speed estimated by pacing. It is important to bring these issues to light at trial in order to overcome them.
Visual Estimation:  Once in a while someone will get a speeding ticket based solely on the officer’s visual estimation of the vehicle. In essence, the officer guessed your speed as you drove by. There are many ways to attack the officer’s experience and ability to make this estimation, as well as variables in his surroundings that can make visual estimation extremely prone to human error.

I have been very successful at getting all three types of speeding tickets dismissed. There are many ways that this is possible. Whereas some people feel their only option is to show up to court and cross their fingers that things go their way, I have found that by far the best way to fight these tickets is to: 1. Be proactive in defending them, and 2) Know what you are doing.

This can be done by challenging the officer’s credibility or ability to recall the situation through cross examination, challenging the machine used to determine your speed, and other procedural grounds of keeping evidence (ie. radar results) suppressed and out of the hearing.
Free Consultation:   Feel free to call me at (818) 336-1384 to discuss your speeding ticket in more detail. I have been successful in getting speeding tickets dismissed throughout Los Angeles, Ventura, Orange, San Bernardino and Riverside counties.
For a partial list of successful traffic tickets I have handled, click here:  Speeding Ticket Dismissals  and scroll down a bit (after the DUI successful results and DMV hearing set asides)
Traffic Ticket Attorney, DUI Attorney, Criminal Defense Attorney
*NOTE: there are some driving related infractions that do not count as a point on your DMV record at this time. Often times It is possible